The Peningtons – A Quaker Family

This article is based on research done by Wendy Tibbitts for a panel produced for the Museum. 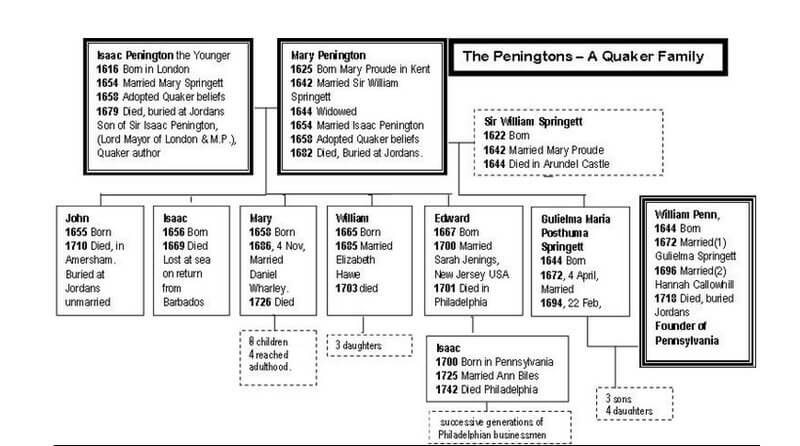 See also the detailed family histories for the Wharley and Penington families prepared by Alun Harriss.

Isaac Penington was the eldest son of a Lord Mayor of London, MP, and Alderman. With his wife Mary, the widow of a Civil War hero, they rented Bury Farm, Old Amersham in 1667 after their former home had been confiscated by Charles II as a reprisal for his father’s part in the trial of Charles I.

The Peningtons became Quakers after a chance meeting with a Quaker preacher who mocked their finery and then explained the Quaker ideals. Isaac and Mary’s subsequent home at Woodside, Amersham, became a meeting place for leading Quakers including George Fox and William Penn. Isaac was imprisoned six times for his failure to swear oaths and pay tithes. Whilst in prison he wrote many letters and published pamphlets, which are still in print today. Imprisonment weakened him and he died in 1679. He is buried at Jordans Meeting House near Chalfont St Giles. Mary Penington survived until 1682. In her will she left 40 shillings to the poor of Amersham. She is also buried at Jordans.

The Penington’s engaged an earnest young scholar to tutor their children called Thomas Ellwood. He had been a childhood playmate of Gulielma Springett, Mary’s daughter from her first marriage, and became a Quaker after visiting the Peningtons. He lived with the family until 1669, when he married Mary Ellis. Their home at Hunger Hill in Coleshill was used for Quaker Monthly meetings for 40 years, and was visited by George Fox and other Quaker Elders. His close connections with the Penington family continued until his death in 1713. He wrote the History of His Life and many religious books.

John Penington, Isaac and Mary’s eldest son, inherited Woodside, and the property in Kent, from his Mother, but lived all his life in Amersham. John was a businessman, writer of Quaker pamphlets and an active local Quaker and Elder. He died, unmarried on 8 March 1710 and is buried at Jordans.

Mary’s daughter, Gulielma Springett, married William Penn in 1672 at King Johns Farm, Chorleywood. Their first home was Basing House in Rickmansworth. William and Guli had seven children but most of them died as infants. Only Laetitia and William lived into adulthood, and both visited Pennsylvania. Gulielma died in 1694 and is buried at Jordans.

Charles II offered William Penn land in The Americas in payment for a debt. He seized this opportunity to give people religious freedom. He sold tracts of land in Pennsylvania to many local Quakers, including all the Penington children, and Thomas Ellwood.

William Penn intended to settle in Pennsylvania, but two years after the first voyage on The Welcome in 1682 he had to return to England to settle a legal dispute. On his second trip in 1698, he was accompanied by the youngest Penington son, Edward, who later became the Surveyor General of Pennsylvania and married the daughter of a Quaker immigrant from Coleshill. Edward died in 1701, but he had already fathered a son, Isaac, and a dynasty of Philadelphian businessmen, Judges, Doctors, and Councillors.